The 10 Stages of Choosing a Halloween Costume for Kids

This stage typically occurs in late August. You know, when CVS begins to display candy corn on all of their end caps. Wonderful. Just wonderful, dearest CVS. You have officially ruined the months of September and October, not to mention the last few days of summer because now we get to entertain the question, “How many more days until Halloween?” for approximately 57 days. Sweet. (No pun intended)

Now that the sugar radar is officially on high alert (no really, thanks again, CVS), your child will begin to assess his/her options and it will look something like this: 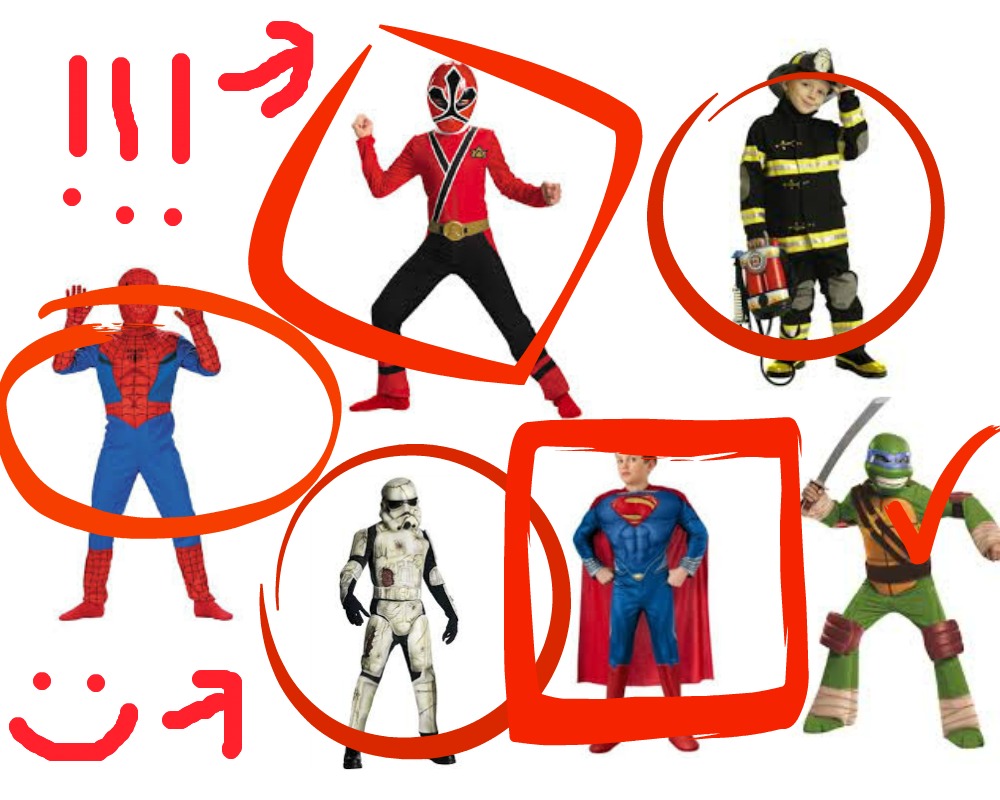 The committal stage typically occurs at the bus stop or in another social setting when your child decides to blurt out, “Hey guys! I’m gonna be a TRANSFORMER for Halloween!! Boo yow!” When he gets blank stares from his friends who have decided to be the cast of Star Wars he will quickly move into Stage 4….

Ha. Ha. HA!!!!!….. He was totally kidding about being a Transformer. Duh. His little brother is going to be a Transformer……(and then he whispers in your ear to ask if you can rent the Star Wars movie so can see what options remain).

After a visit with older “cooler” cousins or friend, your child will learn that they are going “practical” and being football players. What is a kid to do? Panic sets in. Should he band with the friends or be cool like the cousins?

At this point parental interjection is necessary before your child needs to be committed over Halloween costume selection. You will likely discuss topics such as independence, making your own choices, and practicality – because not every mama can whip up a Chewbaca costume with 3 days notice.

Ladies and gentleman, it’s official! He’s gonna be a COWBOY! Praise the LORD! A decision has been made!!!!

After the in-school Halloween parade he thinks he wants to be something else for real Halloween because the Cowboy costume wasn’t nearly as awesome as he planned.

Again, parental involvement is necessary in this final stage because it is now 5:30 on October 31st and your child refuses to wear the selected costume because, as mentioned previously, at the school parade so-and-so was a freakin “selfie” and why couldn’t I have made something that cool? (At this point it is acceptable for you, the parent, to curse Polly Perfect Parent for making you and every other mom and dad who bought a costume instead of making it feel inadequate).  You now have one remaining option. You will be forced to dangle the carrot: “No costume, no candy.”

Stage 10: Did someone say candy?

Your child will run down to the basement, grab the firefighter costume that he’s been playing dress up with for years and run outside with an empty pillow case blowing behind him in the wind.

The 7 Moms You’ll Meet at Mommy and Me Class

A Snow Day in Numbers

Halloween Outfits for Moms (cool ones).