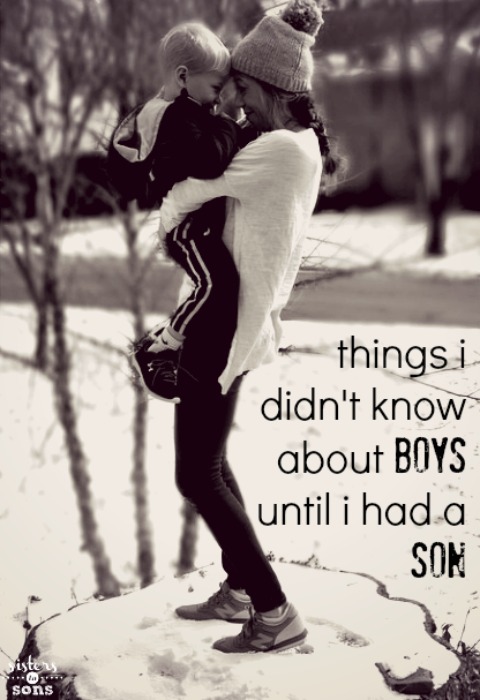 At some point in his early life, there is a strong likelihood that his mother put a bow in his hair…. you know, just to see what he would look like if he were a girl. He probably ripped it out, shook his head wildly, and that mom laughed and thought to herself, “He makes a cute girl, but I wouldn’t have it any other way.”

A dollhouse is just as exciting to a boy as it is to a girl…. and so is a Barbie, but reasons regarding the intrigue for the latter are questionable…..

The obsession with their “thing-a-ling” starts at a very young age.

Comparing sizes of their “thing-a-ling” starts at a very young age.

Basically they think their “thing-a-lings” are awesome from birth on. My 20 month old still wears a onsie at all times for a reason….and the reason has nothing to do with warmth.

And now moving to another region of their body: the head…. (the head that sits on their neck, that is). This is the body part they lead with. Boys are literally head first into everything. It’s as if hands and arms are only secondarily important when breaking their fall(s).

They fart even more than we think they do….. and no bodily function is complete until the official announcement that it, indeed, occurred. As if we didn’t notice……

They are rarely cold.

The less clothing they are wearing, the better.

Not all boys are messy, disgusting, booger encrusted slobs… just most of them. Especially mine.

When they find a pair of socks they like, they will covet them like a girl does her favorite pair of jeans. Washing = unnecessary and, quite frankly, an annoyance.

…and they care about how they look….. just ask the mirror.

They are scared of going upstairs alone.

Even the sweetest and gentlest of them can turn any object into a weapon.

Wrestling is in their blood and is a necessary part of every day. Make that every hour.

Prior to having boys I always thought that if I ever had one, he would dress like this – straight out of the Crew Cuts catalog. I have never been more wrong about anything in my life. Comfort trumps all; “cool” comes in second. If I never see these pants ever again in my life, I would be okay with that. My sons would have heart palpitations.

Boys will stop almost anything they are doing, even legos, for a cuddle and a back tickle……and some things never change.

At some point in their life, they loved playing with their mother’s hair.

They are more sensitive, self-conscious and in need of nurturing than we think.

Nothing, not even Nerf guns, makes their face light up as much as it does when their dad walks in the room.

Before anyone else, at one point, they loved their mom the most…

….And once a mother has a son, game over ladies, he will always be hers…. she’ll even take the boogers.

“Good Job! shoot…I mean NOT good job! Er, um, what was I supposed to say again?”

How to Style Bookshelves